A history of St Peter’s Square and its neighbourhood

£7.50 if collected from St Peter Villas or £10 including postage and packing. Email st.peters-estate@btconnect.com

This is a slim volume, but it is packed with fascinating material about the development of this beautiful corner of Hammersmith.

The man responsible was George Scott who was born in 1780 and lived in a house at Lower Mall. In 1807 he married Hannah Lucy Stoe, the daughter of a market gardener, who brought with the marriage settlement £5,000 and a significant portion of land between King Street and the River. In 1812 they bought the Palingswick estate, including the Ravenscourt manor house and its grounds, for £15,000 and made it their home. 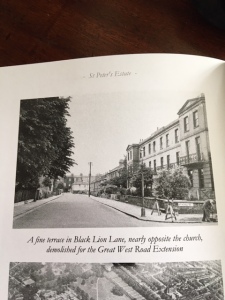 Sir William Bull, the Conservative MP for Hammersmith, wrote in his memoirs in 1922 , that as Scott had given the ground and “subscribed very liberally to the building of the Church, he secretly hoped that the Authorities would call the Church St George’s as a polite compliment to him. But he did not make his wishes known.”

How awkward. It just goes to show if you don’t ask you don’t get….

Incidentally, Sir William personally saved the garden in the middle of St Peter’s Square – buying it to prevent it from being built on. He took a considerable financial risk. But after some dithering, the Hammersmith Council bought the land from him, thus allowing the public open space we still enjoy today. It was not the last time that proposed overdevelopment was to be a source of local controversy.

It does sound as though Sir William was an MP with the right attitude to public service. He gave a fine speech in 1909 arguing that MPs should not be paid. One of his arguments being that we would then end up with councillors being paid. We would have “a very distinct class of professional politician” who went into Parliament for what he could make.

St Peter’s Square has been a cultural hub in various different ways over the years. We learn from this book that:

“In 1973 number 22 was sold to Island Records, which used it for offices and built a recording studio in the basement, nicknamed The Fallout Shelter. Here they recorded musicians such as Bob Marley, Cat Stevens, Jethro Tull, Dire Straits and Mark Knopfler.”

The poet and novelist Robert Graves lived at 35 St Peter’s Square. At that time the area had a bohemian reputation and was known as London’s “free love quarter”. Graves had ménage à trois with his first wife, the artist Nancy Nicholson and their four children, and his mistress, the American poet Laura Riding. My uncle Geoffrey lived there too. At one stage there was a supposed “double suicide” attempt. I was told this was a serious effort by Riding – who jumped out from the top floor and although she was seriously hurt, survived. It was more of a symbolic reflex by Graves – who took the precaution of running down a couple of flights of stairs first before making the gesture of jumping out of the first floor window and having a few minor cuts and bruises.

Naturally there is a chapter on public houses. Black Lion Lane was named after the Black Lion Pub (which opened in 1722). The pub already has skittles inside but Paver reports:

“There are current plans to reinstate the skittle alley in its original site in the garden.”

The Carpenter’s Arms opened in 1873. The Cross Keys pub, which opened in 1828, was named after the crossed keys – as in the keys to Heaven, the sign of St Peter.

There is also a chapter on schools. George Scott’s daughter, Hannah, endowed a girls school in St Peter’s Grove.  It opened in 1849 and is still going as a Church of England primary school for boys as well as girls.  Again, William Bull bought some land, at significant financial risk, to allow the school to expand. They eventually managed to pay him back. 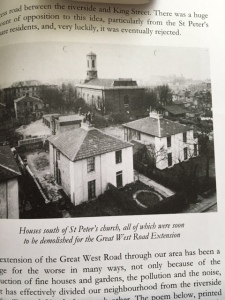 Of course the A4 extension in the 1957 was a disaster for the community. As Paver says:

“The extension of the Great West Road through our area has been a change for the worse in many ways, not only because of the destruction of fine houses and gardens, the pollution and the noise, but it has effectively divided our neighbourhood from the riverside and families and friends from each other.”

A child’s poem protesting against it is reprinted. (“Thou vast and soulless ribbon of concrete/How many are the homes thous didst delete…”)

I am very keen to see the road tunnelised and the old street patterns and housing restored.

As someone who trudges around knocking on doors canvassing I was interested to hear where all the names of various streets and blocks of flats come from.

British Grove was named after the British and Foreign Schools Society. (Frederick Walton the inventor of Linoleum lived there and had an adjacent factory that churned out the squidgy floor covering.) Miller’s Court, down by the River, was on the site of Miller’s Bakery. Beavor Lane was named after a chap called Samuel Beavor who built a house there in 1757. Chambon Place was on the site of the Chambon Works, a French owned factory manufacturing printing presses that was apparently opened by General de Gaulle.

Standish Road was named (for no particular reason) after Myles Standish who was a military adviser to the pilgrims on the Mayflower. Samels Court, the three blocks in Black Lion Lane just south of the A4 built in 1967, were named after Bertie Samels – a confectioner who was Mayor of Hammersmith from 1926-31.

These are many more insights into the area – both poignant and entertaining. A must read for those lucky enough to live in the area – and even those that don’t.