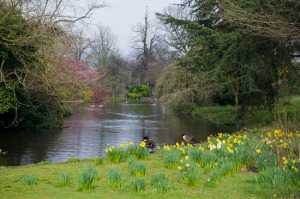 Here is an update from the Friends of Ravenscourt Park on their archaeological exploits:

Remember our history project? This began in 2014 when, with partners the Museum of London (MOL), we held two History Days in the Park. The Museum commissioned a geophysical survey of the site of the hidden moated manor, using ground-penetrating radar to identify the footprint of the house and find the missing arms of the moat. That was stage one. The results were intriguing, and the event sparked so much public interest from all sides that we applied for and got a small grant from the Heritage Lottery Fund to carry out a trial dig on the site. Much time last year was spent in planning, writing specifications, issuing tenders and appointing contractors. Advised by the MOL, and with the support and permission of the Council, we finally commissioned Archaeology South East (part of UCL) to carry out the works in the autumn.

By the date of our AGM at the end of September, the first-ever dig on this undisturbed site had only just begun. The weather was perfect. Three trial trenches were opened up, and finds soon began to emerge. Over the four days when digging was taking place our information stalls attracted over 950 visitors, and interest was intense. The local papers were enthusiastic: reporters and photographers came along to record the scene. The Gazette ran three stories and then posted 18 pictures on its website; the Chronicle pictured us on the front page, and followed up with half a page and more pictures inside. Our dig also featured on the Council website, and all the local online newsletters covered the event too. As heritage and local historic sites now form part of the national curriculum, several schools got in touch. This time we didn’t have the resources to work with them, but we hope to do so in future. The final ASE report revealed that part of the moat was found, and that the ancient cellars of the house survive. The evidence of history under our feet is now compelling.

So what happens next? What was found, together with our continuing research into primary sources, has important implications for Ravenscourt’s future. The presence and location of this valuable site will influence Council planning documents and the Park’s management plan. The current Archaeological Priority Area is in the wrong place, for example; we discussed this with Historic England. Another finding is that many existing descriptions and histories of the Park and the estate have copied secondary-source errors from one to another.
The earliest map we now have that shows the manor of Palingswick dates from the reign of Elizabeth I, but clues in later maps could indicate origins even earlier than the existing 14th century records. So in discussions with the MOL, we have agreed to go forward with a further grant application to enable us to explore the site at greater depth, involving local schools and the wider community as we do so. For the record, these plans will not get in the way of the local community continuing to enjoy the Park. And our history belongs to all of us, not just to a select few.

One thought on “Ravenscourt Park: The history beneath our feet”