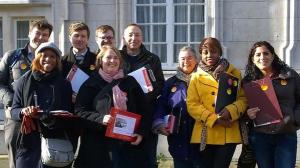 I reported earlier on the cosy arrangement where Charlie Napier, a property developer lobbyist was campaigning alongside Labour councillors in our borough while also lobbying them on behalf of clients.

For many the conflict of interest is glaringly obvious.

Astonishingly the Chief Executive of Hammersmith and Fulham Council, Nigel Pallace, can’t see (or says he can’t see) that there is a problem.

I raised the matter the Mr Pallace and he responded:

This is a matter of proper conduct and behaviour as well as member judgement.  The various rules, protocols and guidelines are set out in part 5 of the Council’s constitution as well as national guidance.  This is all published material.

I cannot know when anyone breaks a rule, unless it comes to light after the event.

The point is that councillors should know that they should not be conducting planning business on behalf of the council other than in the correct way at the proper time.  There is, though, a recognition that lobbying will take place – the constitution includes lengthy guidance to councillors on that issue under “GUIDANCE FOR COUNCILLORS AND OFFICERS DEALING WITH PLANNING AND LICENSING” (begins on page 39 of part 5 of the constitution).  It’s all on the website.

Is there a specific instance which has given you cause for concern?

I had been under the impression that the new administration had brought in some new rules in this respect but it is clear from your reply that they have not.

There is a specific instance which causes me concern. Charlie Napier has been both lobbying councillors on behalf of a property developer and campaigning for councillors (being sufficiently brazen to be photographed doing so
https://hammersmithfulhamforum.com/2015/01/29/former-labour-councillors-cosy-arrangement-as-a-lobbyist-for-property-developers/).

This seems to me to amount to conflict of interest.

My only concern would be regarding a conflict of interest facing a councillor, not a lobbyist. Councillors dealing with planning matters should abide by the rules regarding lobbying to which I referred in my previous reply.  I have no locus in the conduct of party political campaigning.

To which I have responded:

It seems obvious to me that a councillor would be beholden to a lobbyist campaigning for them just as much as if they had given them money.

There should be transparency. Councillors should declare both the campaigning assistance and the donations they obtain from those lobbying on behalf of property developers operating in our borough.

I am disappointed that you and the current administration do not agree that this minimum standard should be adhered to.

We are used to hypocrisy from the Labour Party. But even by their standards this is pretty shocking. They were elected after campaigning against property developers. Now they and the property developers are using the same legmen. Then even when they are caught out decide to persist with the arrangement not even accepting that it should be declared.