During the 1960s, our wise rulers had a grand plan to flatten much of London outside zone 1 and replace the streets with a network of motorways to bring more cars into the centre. I joke not. Happily, the plan was ditched before it really got off the ground. But a small part was realised and it is still in use today. The Hammersmith Flyover, Westway and elevated section of the M4 are now coming to the end of their working lives.

Even though usually gridlocked at rush hour, I imagine these roads are still popular with the great and the good – SW1 politicians, company bosses and the like, who may not need to suffer the indignity and inconvenience of zones 2, 3, 4 or 5 on their way to Heathrow and the counties beyond. But non-central London has paid a high price for others’ convenience.

Vast swathes of once desirable property near and along the routes were blighted, forced to become bidsits and takeaway shops, noisy, grimey
and choked with fumes. There is a debate about what should replace these aging planners’ dreams. A new tranche of equally wise planners and politicians have a new and equally grand dream. 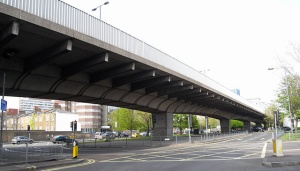 Admittedly, surface noise and pollution levels would improve along this small stretch, but the major part of the route would still be blighted through Brentford and Chiswick, and along once desirable Talgarth and Cromwell Roads. And even the areas above the tunnel would suffer a new blight. In order to fund this very expensive tunnel, developers, planners and politicians would expect the buildings to be very tall to justify the expense.

Hank Dittmar has proposed an alternative to both flyover and tunnel – he argues that creating a surface level boulevard would be the best
option – (registration required).

With traffic moving at civilized speeds around the local community, the road could become a pleasant, desirable thoroughfare again, un-blighting the entire route from Brentford, through Chiswick, Hammersmith, Earls Court, Kensington and Knightsbridge and all the way to Hyde Park Corner.

Trams could ensure convenient and easy transit into and out of central London, almost door to door. Maximum quality of life for maximum numbers of people could be achieved at minimum cost. This has happened in other parts of the world.

For instance, in San Francisco the removal of the Embarcadero Waterfront Freeway and its replacement with a boulevard and tram line, and the removal of the Central freeway and creation of Octavian Boulevard have been great successes. Regeneration has been achieved and traffic has improved. A surface level boulevard would cost a fraction of a tunnel, and in austerity Britain that sounds good to me.

Of course, ministers, civil servants, city mayors and company bosses may not be so happy. They would lose their chauffeur driven expressway to Heathrow. But perhaps, this way they might prefer to travel First Class on Crossrail to Boris Island.