Many local children are missing a day’s school during to strike action.

This is based on a minority of teachers voting to strike in a ballot that took place in 2012. Only 27 per cent took part.

The Conservatives have been clear in condemning the strikes. The Education Secretary Michael Gove said to an education reform conference today:

“For years, for decades, our status quo has simply not been good enough. We can’t and we mustn’t keep going backwards – and failing the poorest above all.

So to those striking today – to those walking out of classrooms to take to the streets – I urge them to reconsider.

The unions, in the past, have claimed to “stand up for education”. Today they’re standing up for their own pay and pensions.

I urge them to join all of us in this hall, all of us who are really standing up for education – putting education first and foremost – and the education of our most deprived children most of all.” 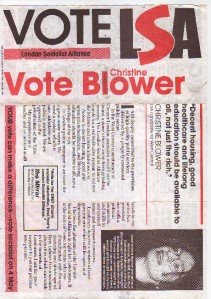 Labour-run Hammersmith and Fulham Council should be condemning the strike. and doing everything possible to keep schools open. Instead they are silent.

They have also refused to condemn other public strikes – which have closed local libraries.

Two of the striking unions – the GMB and Unite are donors to the Hammersmith Constituency Labour Party – having given thousands of pounds in recent years.

At least one of the Labour councillors may actually be taking part in today’s highly damaging strike. Fulham Broadway councillor Alan De’Ath is a teacher at Saint Thomas More Language School. According to the Kensington and Chelsea Council website that is among the minority of schools to be completely closed.

I have emailed Cllr De’Ath to ask if he is taking part in the strike.

Parents in Fulham Broadway Ward – faced with the disruption and harm to their children from today’s strike – will want to know whose side Cllr Dea’th is on.

Is he backing children, parents and hard working, dedicated teachers?

Or does he back the National Union of Teachers in their militant strike action – a union led by Christine Blower, a former candidate for the far Left outfit the Socialist Alliance?

The Labour Council are putting their union paymasters first and the borough’s children last.

I don’t want to pick on Cllr De’Ath too much. What does his fellow Labour ward councillor Cllr Sharon Holder make of the strikes? She is a full time union official with the GMB – which probably gives us a clue.

During an eartlier school strike in 2012 she said:

“GMB school support staff will be strongly encouraged not to undertake any functions normally assigned to the role of a teacher who is taking industrial action.

“School support staff have no wish to undermine the actions of teachers in this dispute.”

Did she help organise a GMB demo today against her own council?

The parents of Fulham Broadway Ward, plunged into chaos today, are just left to watch and weep at the antics of their elected representatives.

Breitbart are on the case.

Cllr De’Ath says he is not a teacher at the school. But during the election campaign – just two months ago – he said he was.

The plot thickens and the smell grows.

The plot thickens and the smell grows.

One thought on “Labour councillor goes on strike?”