Last week local residents started contacting me because they had received a Labour election leaflet claiming that the Conservatives plan to “bulldoze” Charing Cross Hospital.  The leaflet depicted Conservatives as the Grim Reaper – a bringer of death.  The depiction of Conservatives as the grim reaper is deeply offensive to myself and my colleagues.  So much for Labour promising kinder and gentler politics.

Below I have set out an update on Charing Cross hospital and present our commitment to local residents on Charing Cross Hospital.  But please bear with me while I make two more comments on the Labour leaflet.

Firstly, some people have contacted me as a result of this leaflet, actually scared that the hospital might 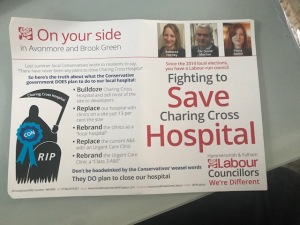 close.  These are people who use the hospital and are scared about what they would do  – some of them, older and vulnerable people.  The fact that Labour is happy to casually scare people like this, in order to win votes, is in my view, callous.  So much for concern for vulnerable individuals.

Secondly, if local parties don’t stick to the truth, and enable voters to make up their own mind about the different parties’ policies and priorities then you don’t really have a democracy.  Misrepresenting your political opponents with such a cavalier disregard for the truth undermines democracy.  And where do we go from there?

This dates from January this year and is an official presentation made by the “Imperial College HealthCare NHS Trust” to local council authorities.

Please read the detail here starting page 14/15.  I would be pleased to hear your thoughts on all the detail. Some important quotes:

“We have recently seen some of our largest ever investments in new facilities and equipment at Charing Cross Hospital, much of which has been made possible by the support of Imperial Health Charity…

Over the past 18 months, some £6 million has been spent on major new developments including: Riverside theatres; main outpatient clinics; a new acute medical assessment unit; our first patient service centre; and the main new facility for North West London Pathology.

In addition, we are spending almost another £8 million on replacing imaging equipment and installing two state-of-the-art LINAC radiotherapy machines so we can provide the most advanced cancer treatments…

As part of our investment in urgent and emergency care services and theatres at Charing Cross, we have co-located our acute medicine beds on the ground floor of the hospital, near to the A&E department, and closer to the imaging department. This has enabled medical patients to be admitted more quickly.

In addition, we are currently working up a multi-million pound refurbishment and expansion of the A&E department at Charing Cross, to begin in the early part of 2018. The likely timescales however, mean that the improvements will impact after the current winter period…

Our commitment to you on Charing Cross Hospital

Firstly, we commit to bringing you accurate and sourced information.    We will monitor Imperial Trust’s reports and publications and get relevant items out to you.

Secondly, we will consult you.  I think the Cycle Superhighway planned for Hammersmith is an good example of our approach here.  Our first leaflet on this matter was entirely neutral and simply pointed local residents to the information – something TfL with their huge budgets had largely failed to do.  We spent many hours leafleting local streets simply to get information to local people so they could make up their own minds.

Thirdly, we will represent you.  If and when Imperial Trust comes out with a new round of proposals and consultation we will be led by what local people think.  It is entirely evident to all of us that residents regard our local hospitals as hugely important.  But the details of any plans are also important and we will seek to transmit to you these details, and then to understand, and then represent your views.

Above all, I expect almost everyone reading this and all the local Conservatives will fight to retain, upgrade, and improve our local hospitals.

Thank you for reading and all comments and feedback, as ever, appreciated.  Email me at carolineffiske@gmail.com.