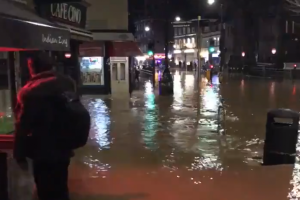 After the recent flooding incidents a resident emailed to say:

“Can I just mention regarding the recent flooding in King Street that we may not have had such a river on King Street if all the street drainage was not blocked due to lack of maintenance on the councils part.

“All over the borough when the rain is extremely  heavy as it was recently there were ponds forming on all streets due to blocked street drainage.

“It seems that the councils policy is to let them all block up and then send the maintenance crew out to deal with the matter in one hit rather than have a regular service on this important water clearing system and of course they get caught out when you get something like the burst we got in king st and street drainage fails  .

“I had to have emergency callout service to deal with flooding outside my own house due to recent heavy rains and street drainage all blocked up.”

“With regards to the burst water main on King Street, once the water receded, the highway gullies were cleaned.  Only 2 gullies in the affected area were found to be blocked.  However due to the water main burst, the sediment which makes up the road base was flushed into the carriageway and subsequently flushed into the highway gullies, meaning once the pot was full of material from the water main burst, no more water could flow into the gully.  Additionally the amount of water from water mains burst was such that the water was not able to drain through the gullies quick enough, added to this was the pressure of the water, forcing the water to spread further until the pressure dissipated.

“In Weltje Road there are two blocked gullies that are with our drainage contractors for repair, one is opposite number 59, at the junction with King Street and the other is at the junction with Upper Mall.  These are in the programme and should be repaired by April 2018.

“Gully cleansing in Hammersmith and Fulham is undertaken on a programmed basis, with reactive cleansing undertaken when required.  Furthermore we are undertaking a large gully repair programme in the borough, aiming to repair some of the historical drainage issues we have on the public highway in the borough.”

Of course the recent instances have been the responsibility of Thames Water. But it is also obvious that keeping the drains clear means that flooding – whether from heavy rain or burst pipes – can be mitigated more effectively. This is a basic priority for the Council.