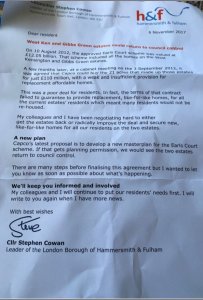 In November a letter was delivered to residents on the Gibbs Green and West Kensington estates from the council leader Cllr Stephen Cowan. It wasn’t from the Labour Party but was an official Council communication – and therefore subject to the rules from the Local Government Publicity Code for accuracy and impartiality. It concerned the Capco proposals for the Earls Court redevelopment.

“My colleagues and I have been negotiating hard to either get the estates back or radically improve the deal and secure new like-for-like homes for all our residents on the two estates.

“Capco’s latest proposal is to develop a new Masterplan for the Earls Court scheme.  If that gets planning permission we would see the two estates return to council control.

“There are many steps towards finalising this agreement but I wanted to let you know as soon as possible about what’s happening.”

This could be good news. For example I have written about a popular and beautiful alternative to Capco’s plans for Empress Place. On the other hand simply maintaining the (ugly) status quo on the estates would be a missed opportunity – just as the current (ugly) Capco plans are.

Would “council control” mean leaving the buildings as they are? The letter is unclear.

Naturally opinions will differ whatever emerges. Which is fine – but I wish it could be more friendly, open and honest. For years there have been bitter divisions and political exploitation. Secrecy has allowed scaremongering to flourish.

Once Cllr Cowan and Capco have concluded “finalising the agreement” will residents (tenants and leaseholders) be given a veto? Would such a ballot be a three way choice between the estates staying as they are, the current Capco proposal or whatever revised proposal emerges? The letter doesn’t say. Yet if Cllr Cowan thinks he’s come up with something that “radically improves” the deal then why would be be afraid of checking if the residents agree?

If we try to find out more the Capco website says nothing about any changes. The TRAs – who are led by staunch opponents of the current Capco plans – are very pleased by the prospect of change. But they don’t seem to have much detail either.

Never mind. Perhaps we can look to the Council’s website to see if we can find the full story there. It used to say in the Transparency section:

“Minutes of meetings between councillors and developers. We now publish notes of all our meetings with developers – no secret discussions!”

Those words have been removed. Instead it just says: “Meetings between developers and councillors”.

Nothing is included about Capco.

Why not? The Council’s Monitoring Officer tells me:

“I can now confirm that the meetings with Capco, regarding the potential return of the West Ken and Gibbs Green Estates to council control, took place with officers under the existing Conditional Land Sale Agreement arrangements, in consultation with the Leader. It would therefore be inappropriate to minute these on the council’s website.  The Leader has been kept informed on progress of negotiations throughout.”

So Cllr Cowan’s letter was false when he told residents: “I have been negotiating hard.” He hasn’t been negotiating hard or soft – he’s just been “kept informed” of how others have been getting on with the negotiating. The previous claim on the Council’s website – “We now publish notes of all our meetings with developers – no secret discussions!” – was still pretty misleading even if it was the officials doing the negotiating rather than the councillors. So it was right that the Council removed those words given they did not reflect the reality.

But it wouldn’t it be better still for Capco and the Council to be open about what they are planning? Wouldn’t there be a better chance of a deal being popular – and therefore sustainable – if all residents have the chance to comment at an early stage?