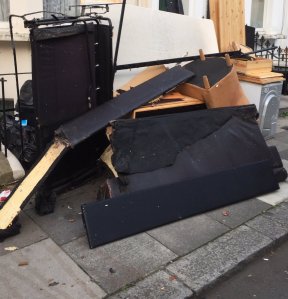 A year ago I wrote about figures showing that fly-tipping is a growing problem in Hammersmith and Fulham.  I’m afraid it will come as no surprise that since then the situation has got worse.

It is true that there has been an increase in the country generally. In England the number of incidents has risen from 852,036 in 2013/14 to 1,002,154. That’s an increase of 17.5 per cent. So the rate of increase locally has been almost four times as high as nationally.

The problem is that the enforcement action is weak. The Government allows a maximum Fixed Penalty Notice of £400. But the Council sets a lower penalty.

“The level of the fly tipping fixed penalty notice has been set at £200, reduced to £150 for early payment. The £400 Maximum limit is not being used.”

But it turns out that is rather irrelevant – as the Council doesn’t issue any penalties anyway. The number of Fixed Penalty fines paid to the Council for fly-tipping for 2016/17 was nil.

“Officers have instead utilised other areas of legislation and issued fixed penalty notices for littering, failure to produce waste disposal documents and failure to adhere to a waste presentation notice. In general officers have prosecuted the following cases and obtained associated fines through the courts.

I’m afraid the Council is simply not rising to the challenge. Fly-tipping makes going for a walk a dreary, depressing experience. Combating it is important for the quality of life we enjoy. I will keep pressing the Council to take this issue more seriously.