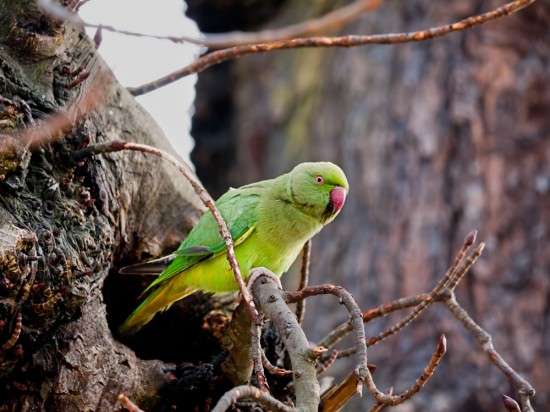 A resident emailed me recently to say:

I went for a walk in Ravenscourt Park the other day and there were literally hundreds of these green parakeets flying between the trees.

It was quite a sight.

But I wondered if the council has any plans to eradicate them?

They are really bad for indigenous flora and fauna and you can see all the bark they are stripping off the trees.

I would be grateful if you could have a look into it.”

Thank you for your email.

I’ve looked for the ring-tailed parakeet as referenced in the article but can only find information on the ring-necked parakeet in the UK; looking at the Latin name (Psittacula krameri) I think they are one of the same.  Ring-neck parakeets are an ever growing sight in our parks and open spaces and having done some research it appears they are recognised at the UK’s only naturalised parrot.  You can find more information here.

Despite being an introduced species they are protected under the Wildlife and Countryside Act 1984 so if the council were to start controlling them (which it has no plans to do) a special licence would be required; these however do seem to be aimed at more where birds are damaging crops, etc.  Additionally, the council acting in isolation would have little effect as another flock of parakeets will simply move into the area so any control of this bird (and given its protection under the Wildlife and Countryside Act 1984 this seems extremely unlikely) would need be done at a strategic/regional level.”

Of course they are beautiful. But then so are the native birds and the trees which are threatened. If nothing is done won’t the problem get out of hand?

5 thoughts on “Ring-necked parakeets: Is it time to act?”