This week saw the Hammersmith Society’s annual awards ceremony. It was a glamorous event at the Dorsett Hotel in Shepherd’s Bush Green – which was mercifully air conditioned.

The Wooden Spoon was given  to “BT telephone kiosks with advertisements that have recently appeared on the borough’s street are notable for their ugliness and, in the era of mobile phones, lack of purpose except as an undisguised method of achieving revenue from advertising.”

I am old enough to remember when phone boxes were in great demand. You would often seem them in use. Sometimes you would even see small queues forming next to them. There would be comedy sketches about how impatient people were.

If the K6 Jubilee Kiosk designed by Giles Gilbert Scott in the 1930s was still present I wouldn’t mind if nobody used them. Or if the replacement ugly structures provided some practical benefit (perhaps charging points for mobile phones) that would also be a potential justification. But why do the Council back something that is both useless and hideous? I await their defence of the indefensible….

I have also asked the Council about a runner up for a wooden spoon regarding a cluster of confusing cycling signs in Iffley Road.

But the evening was not all about phone boxes. Far from it. Here is the full list:

The Hammersmith Society today announced this year’s winners of its prestigious Awards, presented by Cllr Michael Cartwright, Mayor of Hammersmith and Fulham at its AGM on Wednesday 21 June.

This was originally the site of the King’s Theatre demolished in 1963. This new building is an unusually fine and distinguished office building, modest in height, beautifully detailed and in keeping with its location within the Brook Green Conservation Area.

There were two Nancye Goulden Awards this year —

This is a rather quirky but original conversion and extension of the former St Mark’s C of E church into offices. These currently house the headquarters of the Maggie’s Centres and a sales office for the nearby Riverside Studios development. The observatory, with its automated telescope and which was part of the original design, was made in Jackson Mississippi and shipped from New Orleans.

This is a wide ranging project in its ambitions and is one of three involving west London housing estates aimed to demonstrate the important role they can play in increasing our cities resilience to climate change. 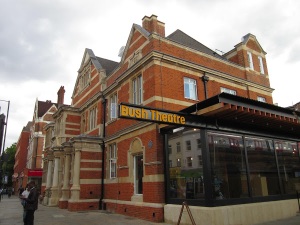 Although the work done recently on the Bush Theatre involved more than just conservation, the Committee felt that the whole of the Bush Theatre project deserves an award. The modernization and conversion, including a wheelchair entrance and garden terrace on the west side, has ensured that the building is now fully functional and more flexible while retaining its informality and the eccentricities of the original building.

BT telephone kiosks with advertisement that have recently appeared on the borough’s street are notable for their ugliness and, in the era of mobile phones, lack of purpose except as an undisguised method of achieving revenue from advertising.

The flats above Apple Estate Agents, King’s Parade, Askew Road, W12, are crudely designed without any reference to the refined detailing of King’s Parade to which they are adjoined.