Local residents have been in contact recently with various proposals for improvements to Ravenscourt Park. Of course there is usually a cost involved although sometimes quite modest. In any case, I have written before about how Section 106 money allocated for park improvements has still not been  dues to bureaucratic delays. This is very frustrating – especially for the Friends of Ravenscourt Park who produced some very reasonable proposals as to how the money could be spent.

One concern is the track on the west side of the Park – an absolute mudbath when it rains. Naturally enough people walk on the grass to avoid the mud and the area of mud increases ever wider.

“The state of this path makes it impossible to do a full circuit walk round the inside of the Park with any pleasure,” says one resident who suggests spreading bark chippings down the track as, at least, a temporary solution. 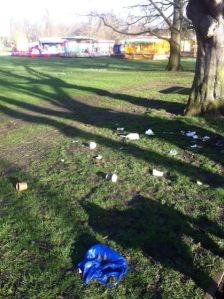 Another concern is that litter is getting worse. There are supposed to be litter collections every two hours when fairs are taking place

“A woodchip path is a very short term solution and will almost inevitably sink into the mud and require constant topping up.  This will also not address the issue of the unevenness of the path.  As hopefully the weather will start to improve in the coming weeks, and with that the ground will dry, I would like the opportunity to level the area and then make a decision on whether woodchip is necessary.  I know it is used on sites such as Wimbledon Common but it is likely they have a good source of quality woodchip and the necessary staffing to revisit this constantly.  That said, you are correct in that this has been ongoing for some time now so we will seek to make a decision over the summer and develop a long-term plan for this area to avoid another winter of the ‘muddy path’.

“Litter and squirrels/foxes is a perennial problem across the parks portfolio I cover, this isn’t helped by the frequency for litter collection dropping to twice a week during the winter months in Hammersmith & Fulham.  On a positive note, from the 1st April we move to our summer litter picking frequency, which is daily with a site based litter picker on-site for 8 hours per day at weekends.  From the Easter weekend this is additionally backed up by another site based litter picker, which ensures at weekends and on bank holidays there is someone on-site throughout the day cleansing.  This should ensure, certainly on Sunday and Monday mornings that the park is clean when it is opened.  We have looked at alternative larger bins including wheeled bins but we don’t have a vehicle within the grounds maintenance contract that can empty them.  Additionally, we do not have the funding to wholesale replace the bins across the park.  I will remind my colleagues in Events team of the promise made when funfairs are on-site.

“I hope this clarifies our position?  Please be assured we want a clean and litter free parks as much as anyone else.”

Then there is the Walled Gardens. The Friends of the Walled Garden do a fantastic job. But there are problems with bindweed on the paths  – and the woodwork in the sheds where people can sit. They could also do with some publicity in the Park to encourage more volunteers.

“A large amount of work has been undertaken by the Friends of Ravenscourt Park Walled Garden over the last couple of months.  This has included digging out the soil, replacing and re-planting the beds primarily to deal with the bindweed but also to plants more appropriate species for the walled garden.  This has all been made possible by the hard work of the Friends of Ravenscourt Park Walled Garden who secured a grant from Tesco’s Bags for Help fund.  We are now in the final stages of the project and will certainly look to link up with the friends once completed to publicise their hard work.

“Hopefully our next project can be to work with the friends to look for further funding for the paths and wooden structures.  The friends do have a website http://ravenscourtgarden.btck.co.uk/ and if they want additional publicity this is certainly something we could try to help them with.”