The Church of St Katherine, Westway, cuts a dark and foreboding silhouette as one drives along the A40. Many assume the Church to be disused, or abandoned, and it’s stark 1950s concrete prefab design, now cracked, darkened, and ravaged by acid rain, does nothing to disabuse the casual motorist that it is not; nor does it hint of the dynamic Rev. Jim Tate, his wife Lesley, and the wonderful congregation that can often be found within. 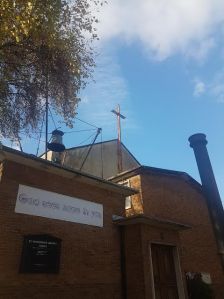 Those that look upon the Church often wonder “Why on earth would anyone design such an ugly Cross.” To which the reply is “the architect didn’t”. The ‘Cross’ is not a cross in the strictest sense, but a relic from the broken and twisted steel superstructure that jutted defiantly out of the shattered and burnt remains of St Catherine Coleman after it, and houses on The Westway, The Curve, and Hemlock Road, were destroyed by enemy action on the night of the 12 th of October 1940.

Please spare a thought for Mrs Emily Tanner and her son Raymond, of No 104 The Westway, Mrs Grace Hoggart and her daughter Ellen, of No 8 Shepherds Bush Road, and Charles Hallpike and his sister Lucy, of No 4 Shepherds Bush Green, who were all killed as they slept; for Mr Alfred Baker, 24 The Curve, and Mr Arthur Underhill, 48 Norland Road, who died as they were taken to Hammersmith Hospital; and for Mr John Bartlett, of No 47 Bloemfontein Road, who passed away the following day.

However the biggest single loss of life in Hammersmith occurred on the 25th September 1940, when the Sun Pub, 120 Askew Road, suffered a direct hit. It is said that 55 people were killed and wounded.

Imagine the scene, if you can. The bravery of the ARP, Civil Defence Volunteers, police, firemen, and residents excavating the smashed wreckage, alert for the cry of the wounded and dying, against the deafening sound of the Anti-Aircraft Guns of Ravenscourt Park engaging enemy aircraft over head. I also reflect upon the resolve of the London Auxiliary Ambulance Drivers, my great aunt Winifred Higton included, National Emergency Health Service, and the gallantry of the RAF.

When the Church of St Katherine, Westway, was finally built in 1959 it did not win any plaudits – unlike the Church that preceded it – however Mr J R Atkinson, the son of the architect of the first church, should perhaps be forgiven for the brutal post-modern design. It is not merely a Church, but a monument to all those killed in the Blitz, the horror and brutality of war, and the bravery of local residents from all walks of life, of which Hammersmith can be proud.

N.B. The Rev. Jim Tate would be grateful for help to conserve the Cross, please contact mark.higton@gmail.com if you would like get involved.