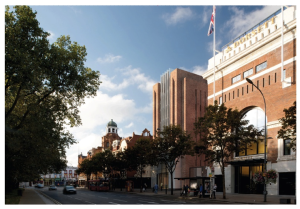 We are faced with another threat to Shepherds Bush Common and Conservation area:

Dorsett Hotels, who did a sympathetic conversion of “Odeon I” (on the right, below), failed in their bid to demolish the Shepherd’s Bush Palladium next door.

They have now submitted a new application to build 7 storeys of “serviced apartments” which would retain only the Palladium’s façade and top it with a red brick “Gotham City” tower with fins which bears no relation to the style and character of the original Edwardian building.

The top-heavy tower appears to be trying to squash the original theatre into the ground! The Palladium has huge historical value: it was the second cinema theatre built in London.  It was built to stand alone, not to serve as the foundations of a monstrous tower.

A sympathetic renovation, with the gaudy paint removed, would restore the Palladium and the West side of Shepherds Bush Common to its former glory.

The Palladium is a locally listed “Building of Merit”.  It forms a vital link in the chain of older buildings on the West side of the Green, with the locally listed Bush Hotel and Grade II listed Empire to the South and the re-vamped Odeon 1 to the North.  Together these buildings form a distinctive and unique townscape which should be protected.

The Conservation Area Character Profile is at

If you agree that this abuse of a loved and historic building should not be allowed, could you write and state that you OBJECT to the application in the strongest possible terms and forward to any groups or individuals who would be interested?

Objections have to be in by October 25th.

This link takes you to the planning application page where you can object with the “make a comment” button: