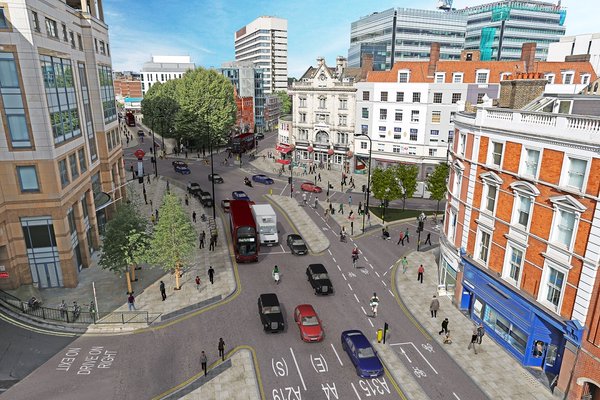 Transport for London is proposing a new road layout around Hammersmith Broadway to improve cyclist safety.

The transformation of Hammersmith gyratory would include:

“We want to completely overhaul this stretch of road and make some serious improvements for pedestrians, bus users and cyclists. Our proposals would greatly improve the area for everyone using it and I hope we’ll see a positive response to our consultation.”

TfL keeps London’s traffic moving through a variety of methods. Technology, such as Split Cycle Offset Optimisation Technique (SCOOT) – proven to reduce delays by up to 12 per cent and being expanded across London, is used. Up-to-the-minute traffic information is provided via digital road signs, TfL’s traffic status page and TfL’s Twitter feeds to better manage the network. TfL also has the ability to control temporary traffic lights from its central traffic control centre, to help further ease traffic and minimise disruption.

Pedestrian Countdown shows exactly how much time is left to cross the road, meaning pedestrians are less likely to hesitate or stop in the middle of the road. An off-street trial of the technology demonstrated that more than 85 per cent of pedestrians felt safer and more confident when crossing the road with countdown

Cyclist journeys through the area will be improved by up to a minute.