On the 12th June 2016, the Queen will celebrate her 90th Birthday. The Government have published guidance on holding a street party.

It is much easier than some imagine. There is no fee, no licence, no insurance. You do not need to carry out a risk assessment, or an alcohol licence,
or a food permit, or a music licence.

You just need to notify Hammersmith and Fulham Council by filling in this online form. Also you will need to get some barriers to close off the road. (Previously I hired some from a firm called Sun Traffic Signals Ltd but I think others just taped off the road and made their own signs.)

You need to confirm that you have knocked on the door of everyone in the street (including any shop keepers) and found general agreement. Also to clean up afterwards.

In 2011 my street was one of around 6,000 in the country that held a party for the Royal Wedding.

I blogged at the time:

“The planning discussions have taken on a soap opera feel – despite our urban environment it has reminded me of a script from The Archers. Who will be in charge of the bunting? Who will be in charge of the tables and chairs? What children’s games should we have? Should everyone just provide food and drink on a random basis or should there be an allocation of different households to prepare a specific dish? What should we do if it rains? When should we start and finish? What should be done about music? 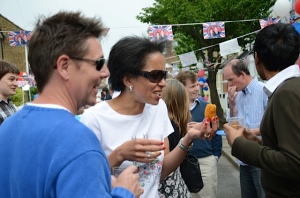 “In amongst all this we have got to know each other. There has been laughter and argument. Those with children have identified others with children in the same age group – perhaps just a few doors along but something hitherto not identified.

“Gardeners have started sharing lawn mowers and swapping seeds. Phone number of plumbers have been exchanged. A Neighbourhood Watch scheme established. In other words our street has become a community and the party hasn’t even happened yet.”

Of course it is all a long way off and might seem a strange topic to contemplate in the cold weather. But taking some initial soundings from neighbours to check who would be interested would do no harm at all.