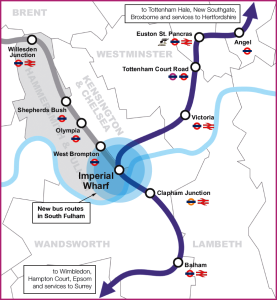 All Conservative councillors on Hammersmith and Fulham Council have expressed their support for a Crossrail 2 interchange at Imperial Wharf. We pushed hard for this when we ran the Council. Curiously, the current Labour Administration has said nothing. We can only hope that this changes by Friday, as the whole borough would benefit hugely from this new transport link.

Anyone can still respond to the consultation by clicking this link and writing “I want Crossrail 2 to stop at Imperial Wharf instead”, adding any reasons they wish. TfL will count the response provided people click “Save” and then complete the main questions in the “About you” section. The deadline is midnight this Friday, 8 January 2015.

Here is the full text of the letter to Michèle Dix CBE, TfL’s Managing Director for Planning:

Response to the Crossrail 2 consultation

As the Conservative Councillors for the London Borough of Hammersmith & Fulham, we are writing in support of a Crossrail 2 interchange at Imperial Wharf.

Imperial Wharf has significant advantages over the current plans for a station at the eastern end of the King’s Road:

Interchange – Imperial Wharf would form the main Crossrail 2 interchange with the West London Line, reducing journey times for passengers. Without a separate interchange, Clapham Junction is likely to face severe station capacity problems, because it will also handle new demand from dozens of mainline routes. The interchange would also remove pressure on Overground services at the existing Imperial Wharf station, while relieving pressure on the District Line at West Brompton, Fulham Broadway and Parson’s Green.

Passengers – based on its current catchment area alone, more commuters would use a Crossrail 2 station at Imperial Wharf. This number rises when new development is anticipated. It rises again when new bus routes in south Fulham are considered, as there would be substantial demand for improved links under Crossrail. When passengers transferring from the Overground are added, the commuter case for Imperial Wharf becomes overwhelming.

Alignment – a natural alignment from Imperial Wharf (through Clapham Junction) to Balham would not involve tight curves. Changing the orientation of the track through Clapham Junction would therefore result in faster journeys, an equivalent track length and lower maintenance costs than under the current plans. We also welcome TfL’s acknowledgement that the foundations of the riverfront buildings are navigable. There is no engineering barrier to a Crossrail 2 station at Imperial Wharf.

Cost – land values around Imperial Wharf are cheaper, with the ability to redevelop a brownfield site to offset the cost of the station. The Lots Road Car Pound site would allow a significant capital receipt from new housing, as well as a station entrance in Chelsea. There is also the possibility of s.106 contributions from neighbouring sites that are due for redevelopment. Together, these factors suggest a significantly lower cost for an Imperial Wharf interchange than building a King’s Road station with no associated redevelopment.

Olympia – District Line services to Olympia have been a recurrent issue for residents, for the exhibition halls, and for solving the bottleneck at Earls Court. A Crossrail 2 interchange just two Overground stops away at Imperial Wharf would finally provide a solution, particularly when combined with more frequent Overground services. Likewise, Imperial Wharf would provide a real alternative for many more passengers at West Brompton, which faces growing pressure from new development.

Regeneration – a key aim of the Crossrail 2 project is to unlock more jobs and homes, assisting in London’s regeneration. There are several major redevelopment sites around Imperial Wharf, all of which are poorly served in terms of public transport links to central London. This has hampered their progress. A Crossrail 2 interchange would spur substantial investment and create new employment around the station. By contrast, no significant development sites in Chelsea would be unlocked through the current plans.

Support – unlike the plans for a King’s Road station, there is unequivocal local support for bringing Crossrail 2 to Imperial Wharf. It would benefit thousands of commuters in Fulham, both directly and by reliving pressure on the District Line. It would still benefit thousands of commuters in Chelsea, with greater benefits for the poorly connected areas around World’s End and Lots Road. It would also offer benefits along the rest of the West London Line. Local residents consistently tell us that they want Crossrail 2 to serve our area.

An Imperial Wharf interchange is compatible with the original conception of a Chelsea-to-Hackney line, which for many years included safeguarded land in Fulham. It would allow a station entrance in Chelsea, on Lots Road, and others serving Chelsea Creek, Chelsea Harbour and Imperial Wharf. At the same time, it would enable Crossrail 2 to be cheaper, faster, serve more passengers and tackle overcrowding at multiple stations, while delivering the regeneration always intended.

Given these advantages, it was frustrating to see many inaccuracies and omissions in the report provided to Greg Hands MP in October. We hope that you will now commit to undertaking a proper technical study of the Imperial Wharf option, which will provide a credible basis for assessing passenger numbers, cost, regeneration potential, journey times, station alignments, tunnel routes, shaft locations, Overground usage and the impact on other stations and lines.

In administration, we urged the case for an Imperial Wharf interchange during TfL’s consultation process in 2013. Given the new Commissioner’s openness to rethinking the plans, we strongly urge the case again. It is a far better option than the King’s Road.

We would welcome an opportunity to meet in person to discuss an Imperial Wharf station on behalf of our residents.