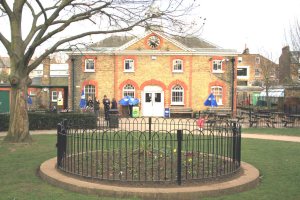 There has been lots of construction work under way recently around Ravenscourt Park – and in the borough generally. I have mixed feelings about it. It is good that new homes are being built but very unfortunate that they should be so needlessly ugly. Part of the deal with these property developments is supposed to be Section 106 money – the property companies hand over cash to the council for specific local improvements.

The trouble is the money is not always effectively spent. Also sometimes it takes ages for it to be spent at all.

We met last week with Peter Kemp, Planning Change Manager for LBHF, and he told us the working party led by Cllrs Cowan, Schmidt and Young are about to make decisions on the use of Section 106 monies for the improvement of Ravenscourt Park and other local amenities.

He also told us that First Base, the developers of 282–292 Goldhawk Road site, have transferred the £75,000 designated for parks and open spaces, and another £3,600 allotted for trees.

There is general support  from both our groups as well as from other local amenity societies and from the Askew Business Network for an improved northern entrance (ie from Goldhawk Road) to Ravenscourt Park. Recent Green Flag judges have remarked on its uncared-for and unwelcoming appearance. As well as these considerations, the overhanging trees and shrubs form a dark corridor that can make park users feel unsafe.

We would also welcome improvements to refresh the appearance of Starch Green, but we realise £75,000 will not stretch far unless funds from other local developments can be accessed as well (ie both the Linden Homes developments and the Royal College of Music development), so we list here what residents would like to see in order of priority.

These ideas have been extensively discussed with our members and with other amenity groups, and we would welcome your support for them.

Pretty serious detailed proposals. It seems to me they would deliver very effective value for money. Of course there will always be competing claims. I’m concerned about drainage. The Friends of Ravenscourt Park have also expressed dismay at the stench in the lavatories.

So Cllr Wesley Harcourt, the Council’s Cabinet Member responsible, would be entitled to implement the Friends proposals in full, or decide to vary them or to reject them entirely and spend the money differently on other things he regarded as greater priorities. What is unacceptable is the endless dithering.

The money’s been sitting in the Council’s bank account since May 20th. Long before that they knew it was coming. Yet they are just letting the whole thing drift.

“Members of the administration are aware of the request from the resident group to spend money on this project. Members are currently working through the requests from resident groups for spend, from Section 106 agreements.  We will advise you of the outcome of this request in due course.”

Meanwhile the seasons change, the years go by and our children grow into adults. The council should get on with it. At present the its planning process lacks proper accountability to local residents.