Last week saw the Hammersmith Society’s AGM at the Lyric Theatre including their Environment Awards.

There were some worthy winners.

For instance there was the Dorsett Hotel in Shepherd’s Bush Green. 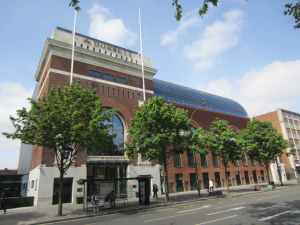 “This scheme does not need much introduction.

We looked at the original proposals in about 2001 when Roger de Freitas was Chairman and we quite liked it. He thought it was ridiculous to try and convert an inward looking Listed cinema building into an outward looking 4 star hotel, rather than start again.

It was opened in 1923 as the Pavilion Cinema designed by Thomas Verity, then changed to the Gaumont, then
Odeon and finally Rank Bingo!

Anyway they stuck with it and personally I think it is rather a triumph and the Committee agreed that Shepherd’s Bush would be the poorer without it.

A distinctive element of the original was its amazing barrel like roof which has been replaced in glass and louvres: Looks pretty spectacular from the tube.

“Banim Street is a narrow road running north-­‐south from the heart of Brackenbury Village to coming into Glenthorne Road by Secrets Club. On the west side of the street is an unbroken terrace of handsome two
storey terrace houses.

This scheme finishes this terrace by both repeating the pattern of houses but also introducing a three storey stop end.

The development consists of 3 houses, 3 flats and some office space. There is some access from the little cul-­‐de-­‐sac
and pedestrian passageway which has been retained.

Overall the Committee thought this was a charming and sensitive scheme. The architects were Haines Phillips.”

Wooden spoons were (quite reasonably) awarded to the Council for:

Then there was the Lyric, the hideous building hosting the gathering. Mr Ryland (bravely) said:

We described the vertical louvres on the drawing as looking like a bar code and we think that the reality is not much better.

The comments on St Peter’s Place also seemed to me fair.

“This is a residential development of some 41 units – 33 flats and 8 houses. The site is a  peninsula bounded by St    Peter’s Square, King Street and British Grove.  It replaced the former VW garage and effectively acts as a  sort of    gateway into the square. We together  with St Peter’s Residents Association were much involved with the various proposals with different  developers.  This scheme was  originally designed for NHHT who sold the site on to Crest Nicholson. We  were relatively happy with approved scheme  but it  has rather lost its way during the development and  although they have used good materials, much of the  final detailing is rather clumpy. Overall the committee were quite disappointed. The original architects were Acanthus Lawrence Wrightson.”

All I say that was had I not lobbied, as a ward councillor, for changes from the earlier proposals – a complete concrete block – it would have been much worse. 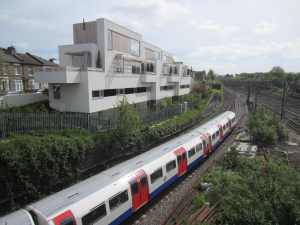 The Society gave an award to a blot on the landscape of Waldo Road in College Park.

“Interesting to note that the scheme had a difficult birth through
planning. The client/architect was told by the planning officer – who
I won’t name – that the Council could not countenance a modern design
in the street. He decided to appeal and by luck the Planning Inspector was Swedish – and she absolutely loved it – and so did we! The developer/architect was Alfred Munkenbeck.”

So much for local democracy – or for any reliance on the Hammersmith Society to be a force for beauty or conservation.

But still the good news it shows that there is at least one mystery planning officer in Hammersmith and Fulham with some respect for tradition….