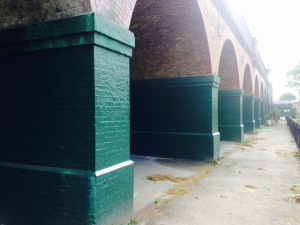 It’s extraordinary how bureaucratic obstacles can make even the most simple challenges take a long time. But at last some of the arches of Ravenscourt Park have had the old junk cleared out and been opened up.

“The primary aim of this project was to improve connectivity between the southern end and main body of the park and to restore the visual quality of the Victorian railway structure.  The majority of work has been completed with the exception of some surfacing work under the arches and some landscaping to the south of the arches, all of which will be undertaken this coming autumn once the summer rush in the park has finished and the paddling pool has closed.  There were never any specific plans for using the space, as stated earlier this was a project predominantly to deliver aesthetic improvements.

“The feedback from the Friends of Ravenscourt Park and general park users has been very positive.”

I would like to see a ping pong table (or a whiff whaff table as Boris Johnson would call it) in one of the arches. They have them in Normand Park stuck to the ground. You have to bring your own ball and bats but it works rather well when it isn’t too windy.

One thought on “Clearing the arches in Ravenscourt Park – anyone for ping pong?”