I have been watching the various VE day celebrations around the UK with mixed emotions: pride at a hard fought victory over a great evil overlaid with the burden of sorrow, remembering all the lost lives and the sacrifices of our armed forces and civilian population. 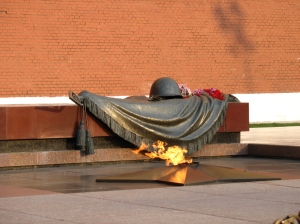 Tomb of the unknown soldier in Moscow which contains the remains of the unknown
soldiers, killed in the Battle of Moscow in 1941.

My father fought in the Second World War and this experience had a huge impact on him throughout his life. I am sure this is true for all those who fought for our country and for our freedom. As the war impacted my father, so it has impacted me. It has taught me the importance of the sacrifices made and the hardships endured by all peoples subjected to the horrors and oppression of the Axis powers. The cost of WW2 on ordinary people is so immense it is almost impossible to comprehend. It is thought that approximately 60 million people died in the conflict, many of them innocent civilians. That is about 3% of the world’s population in 1939.

It is with regret that I note the almost total absence of any mention of the Russian people from the commemorative events held here over the last few days. They paid a huge price in helping to defeat Nazi Germany and safeguarding our freedom and liberty.

It is estimated that the Russian people suffered between 23 million to 27 million military and civilian casualties. Whatever the actual number was is almost irrelevant as the vastness of the loss dwarfs any sense of real understanding.

We should never forget the many hardships endured and the sacrifices made by ordinary Russian soldiers and civilians fighting the Nazi’s. It is accepted that the war would have taken an eternity to end without the efforts of the Red Army and the Russian people.

As Churchill said in the Commons on 2nd August 1944 “I have left the obvious, essential fact to this point, namely, that it is the Russian Armies who have done the main work in tearing the guts out of the German army. In the air and on the oceans we could maintain our place, but there was no force in the world which could have been called into being, except after several more years, that would have been able to maul and break the German army unless it had been subjected to the terrible slaughter and manhandling that has fallen to it through the strength of the Russian Soviet Armies.”

Of course one should absolutely question many of the actions and motives of Stalin and the Soviet leadership and indeed the brutal way Eastern Europe was subjugated by the Soviet regime from 1945 to the fall of the Berlin Wall. However this should not colour our view of the painful losses suffered by ordinary Russians.

There is also the matter of the many brave British servicemen many of whom lost their lives on the Arctic convoys supplying our Russian allies. They fought in the most difficult of circumstances enduring numerous fierce German attacks and extreme weather. As the Telegraph reported in September 2011 on the 70th anniversary of the commencement of the Arctic convoys “In all, 101 ships were sunk, and some 3,000 Merchant Navy and Royal Navy seamen were killed by explosions, fires and freezing water.”

In West London, we have a thriving Russian community consisting of many hard working men and women (very few of whom are billionaires, contrary to popular belief). I can not help wondering what they are making of this. Our differences with modern Russia may be many and substantive but we should not let these cloud our memory or distort history.

We should salute the fallen Russians of WW2, be eternally grateful for their sacrifice and always honor their memory.