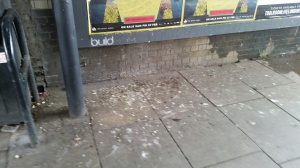 Residents are getting ever more frustrated by the failure of the council and Transport for London to deal with the squalor along Goldhawk Road under the Stamford Brook London Underground Rail Bridge.

The area is a disgrace to our borough and a daily source of unpleasantness to those walking past it. Improved pigeon proofing works from TfL have been promised but have not materialised. The Council fails to carry out jet washing of the pavement to clear away the pigeon fouling.

Recycling bins in this prominent location attract constant fly tipping which the Council is slow to remove.

I will continue to press for the Council and TfL to take action.