I was born and bred in Hammersmith and my family have lived in the Borough for over 50 years.

Hammersmith is a great place to live, work, socialise and be educated in. In the last few years I’ve noticed a massive improvement in the area with new investment, opportunities and a real sense of optimism about the place.  Unfortunately things are no longer quite so rosy. Here is my experience with the increase of fly-tipping and in the general state of the streets. 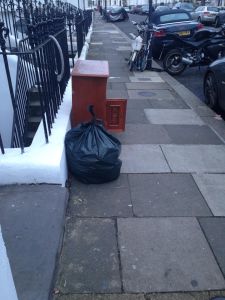 Fly-tipping is something that has always happened and probably always will. Previously when it happened it was dealt with quickly, efficiently and with a minimum amount of fuss. That has all changed in the last few months. I’ve just checked and I’ve had to use the H&F Report It App a total of nine times in January alone. I could have used it a lot more but sometimes I just don’t have the time to log each incident I come across. I’ve come to the conclusion that if I don’t report it then it just won’t get removed in any kind of hurry.

Going to work the other morning I saw fly-tipping in a street I regularly walk down. I had a particularly busy day at work so was unable to report it. Coming home that evening I noticed it was still there. When I got home I reported it via the app.  As we live in the 21st Century I also sent several tweets to LBHF and one of my Labour Ward Councillors during the course of the next couple of days. I didn’t receive any replies to the tweets. Eventually the fly-tipping was removed on the day that street had it’s normal rubbish collection.

At the weekend I reported branches which had fallen from a tree lying across the pavement in another street. Those branches had been there for at least seven days. I can’t believe any kind of regular street monitoring service could have missed this. I remember walking past a dumped Christmas tree so many times that we were almost on first name terms before it was removed.  Another local street often has so much fly-tipping, rubbish, dog fouling and bicycle’s chained to lamp posts that it can be like navigating through an obstacle course at times.

It’s ironic that each time I report an incident of fly-tipping I receive an e-mail from “Love Clean Streets”. Now I’m all for doing my civic duty but I expect as a given that my local Council actually do keep the streets clean. LBHF Council need to do so much better.

One thought on “Mark McDermott: Why do the Hammersmith Broadway Labour councillors ignore fly-tipping?”