This week a letter arrived from my Labour Member of Parliament Andrew Slaughter asking for my vote in the General Election. It contained his familiar allegation that Charing Cross Hospital and its A&E department faced closure adding that “the local Conservative Party support the closure of our hospital”. These lies do not become any less despicable by the frequency with which they are repeated.

Then he claimed that “our A&E waiting times are among the worst in the country”.

Again that is quite untrue.

The figures released this morning showed that last week 91.2 per cent of patients were seen within four hours at the Imperial College NHS Trust (which covers local hospitals). That was just below the national average of 92.3 per cent. But it was most certainly not among the worst in the country.

For the previous week, ending January 25th, Imperial’s figure was 93.3 per cent – slightly ahead of the national average of 93 per cent.

The week before, ending January 18th, Imperial’s figure was 90.2 per cent against a national average of 92.4 per cent.

For the week ending January 11th, Imperial’s figure was 77.8 per cent against a national average of 89.8 per cent. So that was a bad week. But even in that week there were several other NHS trusts doing a lot worse than Imperial.

Then the previous week, the one ending January 4th, Imperial’s figure was 90.3 per cent against a national average of 86.7 per cent.

Furthermore these are the figures for England. In general the NHS in England performs better than Wales where Labour run the NHS: 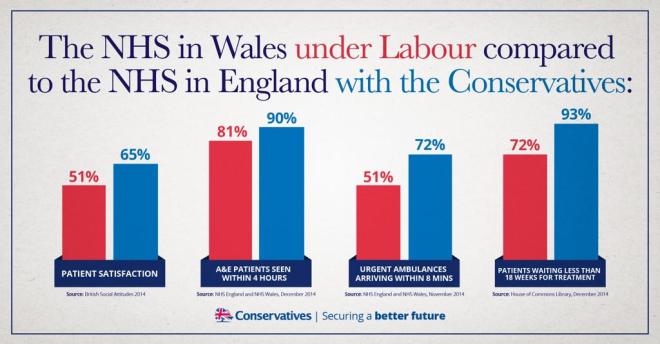 But the claim from Mr Slaughter about our local NHS waiting times being “among the worse in the country” is simply wrong. It is not a matter of opinion. Nobody looking at the figures in a fair minded way could possibly conclude that his allegation was true.

That is not to say deny that the NHS should not strive to do better. The target is for 95 per cent of those attending A&E to be seen within four hours. If Mr Slaughter really wanted to help with that he could have used his leaflet to remind residents that there was now seven day GP access in the borough.

But it is insulting to doctors, nurses and other NHS workers to claim they are performing less well than they are.

Mr Slaughter owes them an apology.