Never in history, has our country, nor the world, owed so much to one man.

It is without doubt in my mind, that Sir Winston Churchill was the greatest politician, greatest Prime Minister, greatest person that this country and probably the world has ever seen. Whether you share that view or not, it is undeniable that he was a truly great man.

That is why it is so important that we remember his extraordinary life fifty years after his death and continue to do so in years to come. The word extraordinary is often overused, but in Winston’s case it feels underwhelming. No amount of adjectives, superlatives or literary device could quite encapsulate the man he was. 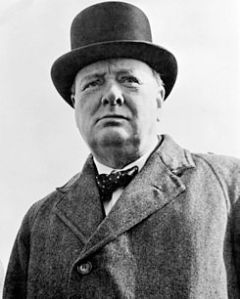 Not only was he our greatest wartime leader, at our time of greatest need, he played an important part in the victory of the 1st World War. He modernised the Royal Navy as First Lord of the Admiralty, and played an important role in the development of the tank. He came back from the shock post war election defeat to limit the damage that Atlee’s Labour Government was doing to this country. He was a prolific writer, a journalist, a historian and Nobel Prize winning author. He was a bricklayer and an accomplished painter. His early life saw him pop up in so many far flung parts of Empire at many important events, he could easily overshadow many fantastical fictional characters.

He faced challenges in his personal life, most seriously severe depression, and in his public life, his resignation over the Dardanelles, but he overcame them. Following his resignation he became an officer on the front line in the trenches when many in his position would have retired from public life. Between the wars he spent years in the political wilderness and first saw the dangers and evil of Hitler and Nazism when mainstream popular opinion was against him.

His instinct for what was right was so strong he also foresaw the rise of the Iron Curtain and the Cold War. His strength of his convictions was what was so necessary at that darkest time, but also what caused him some of his challenges. He was a champion of free trade and resigned from the Conservative Party over that issue to join the Liberals, only to “re-rat” years later.

His oratory, written word and wit are so memorable that people can recall hundreds of his phrases over a lifetime and sometimes century after they were said or written. He’s even given credit for fantastic lines he didn’t say, but are so good that people believe Winston must have said it.

He was a bon viveur, a gregarious lover of life, who had such a prodigious appetite for champagne and cigars that Pol Roger named their vintage champagne after him and Romeo y Julieta named a style of cigar in his honour.

He help to found Churchill College Cambridge, which was named in his honour. He was respected and adored across the world, especially in the USA. He was an Atlanticist and believed in the Empire and Commonwealth, and I’m sure would not have wanted this country to distance itself from it, as it has.

Churchill was the ultimate statesman, and would almost certainly be on the right side of the argument over what to do today over Russian aggression or Islamic terrorism, or any other geopolitical problem we will face.

He was a man that would have been a leading politician in any generation, but we must be so very very thankful that his moment was at our darkest hour.

I have been fascinated by him for a most of my life since reading about his accomplishments whilst at school. He is probably one of the reasons I love reading about history and why I got involved in politics. He inspires me to not always follow the crowd and stick to what I believe in, even if it sometimes is contrary to mainstream opinion.

If you want to find out more about his remarkable life, I would recommend Martin Gilbert’s biography, as well as Boris Johnson’s recent book. To read more from Churchill’s own voice, his histories of the English Speaking Peoples, the Second World War and on Marlborough are splendid, to name just a few.

One thought on “Cllr Andrew Brown: Half a century on, Churchill’s still the greatest”