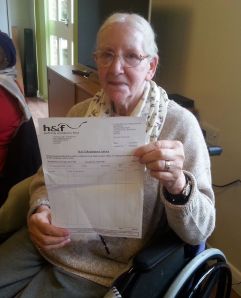 Often being a local councillor can be frustrating in battling away against bureaucratic obstruction. Bill Gough wrote on this site about how Lunch Club+ for the Blind were turned down for council funding purely over spurious complaints about the form filling.

I was very heartened to get the following email from Bill this afternoon:

“At last. We all, from the Lunch club, wish to thank you deeply for your input to gain us a grant award from the council’s ‘fast tract grant’ scheme. As you know, our first application was denied but thanks to your input we finally received a small grant of £2000. 00 with our second application {which incidentally was filled out identical}. I’ve attached a photo from Shirley Hibberd – the lady you initially spoke to – holding up the grant certificate; to use as you wish. Thanks again. Bill