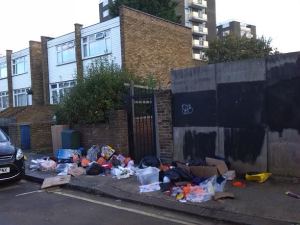 I used to live in Devonport Road, in Shepherd’s Bush, and one of the motivations I had for standing for the council in 2006 was the filthy state of the streets when Labour were running the council.

Eugenie White, who still lives in Devonport Road, was also spurred to become a councillor out of this sense of yearning for civic pride.

The hard won improvements during the eight years that the Conservatives did not come about by accident. Nor did they involve increased spending.

It was a matter about being rigorous in going through the contracts and in holding the contractor – as it turned out Serco – to account.

For example when Cllr Greg Smith, was the Cabinet Member for Residents Services, he would hold regular “walkabouts” with Serco reps to monitor street cleansing. These involved several hours touring the streets to ensure that the terms of the contract were being fufilled. Earlier this year he held one on January 21st and another on March 18th.The crews of street cleaners knew that any lapse would be challenged.

Since Labour took over in May they have stopped bothering. None have been held. None are planned.

Under Labour the message to Serco is that they will be paid regardless of whether their work meets the standard agreed to. If Labour don’t care – why should Serco care?

So Devonport Road is now back in the state it was in 2006 – as the picture shows.

The Conservatives may be in opposition but we will not be passive. We are planning a programme of “Grotspotting” throughout the borough to demand that Serco honour their contract. Councillors will be encouraging those involved in  residents associations and “community activists” to help with this task.

I will be touring the Ravenscourt Park Ward on Monday November 24th will my fellow ward councillors Lucy Ivimy and Charlie Dewhirst.

If you will like to join us , or to help in your area please do email me on harry.phibbs@gmail.com

One thought on “Devonport Road under socialism”