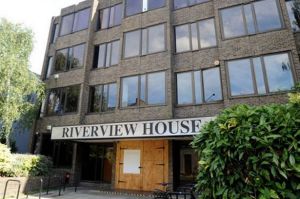 The good news is that it is proposed to knock down Riverview House – an eyesore in Beavor Lane that was once used for the Council’s housing offices.

The bad news is that the design of the proposed replacement is just as ugly – as well as being seven storeys rather than six.

It is proposed to provide 203 “units” of student accommodation. At least proposals for an Algerian Consulate – with all the queues that would have involved – have been withdrawn.

The “consultation” consisted of three options – but not only were all the designs modernist – they were all from the same firm of architects!

As Samuel Johnson said: “There is no settling the point of precedency between a louse and a flea.”

Furthermore the focus was on the stakeholder aristocracy of the amenity societies – those with the dedication to attend special meetings at the town hall. Far more realistic would have been to offer some genuine alternatives and to have written to residents in the area with a synopsis – including images.

Anyway objections need to be sent in by November 3rd to denuka.gunaratne@lbhf.gov.uk

Sometimes the ugliness of a design is – absurdly enough – not a valid grounds for refusing planning permission. However although this property itself is not located within a conservation area, it is located opposite one; so the proposal’s impacts on the setting and appearance of the conservation area will also be matters for consideration.

My own view is that we shouldn’t have more ugly buildings whether in conservation areas or not. The Council’s Development Management Plan is a weak document. It talks about the need for “a high standard of design”. But who decides what is good design? It would seem to be the planning officers which means it has to be modernist to reflect their prejudices. There is a reference to the need to allow “scope for design freedom”. It adds: “The aim is not to stifle innovation”. By “innovation” the planning officers mean yet another identikit, dreary, concrete slab.

The document supports more tower blocks where there are already tower blocks. That is not the wish of most residents. To be told by the “experts” after a patient sigh not to worry as they will tower blocks of “good design” is not convincing. The guidance defers to CABE – who are pro tower blocks. Such structures are praised by the council as “landmarks” – which is one way of putting it. The policy should be to have no further tower blocks and a priority given in redevelopment schemes to reduce the existing number of tower blocks.

So the policy needs to change. But even the existing policy gives valid grounds for refusing the application for Riverview House.