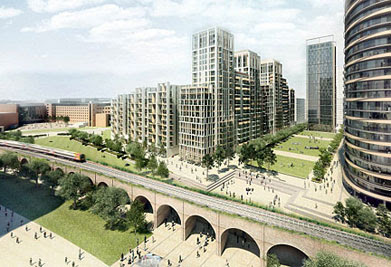 The property developers St James have applied to Hammersmith and Fulham Council for permission for a hideous development by Wood Lane in White City – to include a tower block of 27 storeys and another of 28 storeys.

To object you need to email neil.button@lbhf.gov.uk by November 9th.

The site was recently sold to St James by Marks and Spencer – who used it is as dreary but low rise warehouses for testing their products. Given the housing pressure in this part of London  a change of use certainly makes sense.

Of course the planning officers claim that the only way to achieve new housing on that scale in such a space is to have the tower blocks. That anything else would not be financially viable.

Such claims are nonsense. They merely reflect the prevailing ideological prejudices of the establishment and architectural establishment. The developers also go along with this “group think” as the easiest way to get a quiet life. 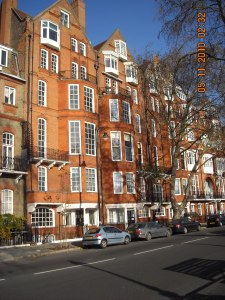 But we could have a similar number of new homes – and similar levels of profit for St James with a square of neo-classical mansion blocks.

Indeed a rather better profit as attractive properties sell for more than ugly ones. Much of our neighbouring borough of Kensington and Chelsea shows that high density can be achieved in this way – without high rise monstrosities. (See the example on left from the Chelsea Embankment.)

Even limited to six storeys mansion blocks can provide 300 homes per hectare. So that would be 1,260 homes on the the 4.2 hectare site. If we allow seven storey mansion blocks that would get us up to 1,470 – thus more homes than the tower block proposal.

While the tower block proposal includes 1.6 hectares for some green space “White City Green” how close to nature would you feel at the foot of 28 storeys? The mansion blocks would have less green space – but it would be far more pleasant.

In this borough in recent years the debate about regeneration has been unsatisfactory. Labour have effectively been anti development. They have expressed hostility to even talking to property developers – who they always call “property speculators” which is an odd term to use for people building new housing. They also refer to all new private sector flats as “luxury flats” – however modest they might be. Then they would finish off with the false and rather unsavoury claim that they would “all be bought by foreigners.”

Yet given that these days the state is not going finance developments where 100 per cent of the homes are for council tenants paying a small fraction of market rents a refusal to involve the private sector means a refusal to provide new homes. Setting impossible conditions – such as Livingstonian targets of 50 per cent “affordable” housing – amount to the same thing. Nothing be built.

Labour’s stance is a terrible betrayal. The “property speculators” are never going to starve. But the victims are residents in the wards Labour represents – who are stuck in deprivation and dependency.

Where the Conservatives have made a mistake is in agreeing to the development coming in the form of tower blocks. I have never made any secret of my view that this is an odd stance for Conservatives to take.

Thus in recent years Labour locally would pose as the anti tower block party. I think Cllr Michael Cartwright is actually sincere about it.

By contrast the Labour MP for Hammersmith Andrew Slaughter found it expedient to criticise the Conservative council for proposing them. Mr Slaughter was all for them during his decade as council leader – for other people at least. He would pontificate on the merits of modernist egalitarian architecture from the drawing room of his Victorian terraced house in Becklow Road.

Anyway at the council meeting in October last year Labour pledged that if they came to power there would be no more tower blocks. It came in a debate on the White City Area Planning Framework.

“If we win in six months time we will make a radical difference and rewrite this document.”

Since then has done diddly squat about it, of course.

It may be that Cllr Cowan can’t given the byzantine nature of the planning system. But then he shouldn’t have made the promise.

What the council could and should do is to sit down with the developers and agree an alternative scheme that does not blight our borough with yet more tower blocks.