I have proposed the following motion which is to due be debated at our next Hammersmith and Fulham Council meeting:

“This Council recognises that for trade unions to be free and independent they should be financed by their members rather than the state.

Therefore this Council resolves that:

(1) While the Council should be flexible in allowing staff to spend time working for trade unions, Council staff will not be paid for any time they spend on trade union activity.

(2) The collection of membership subscriptions will be a matter for the trade unions themselves rather than something the Council is involved with via the payroll system.

(3) The Council should cease providing office accommodation to trade unions on Council premises at below market rents.” 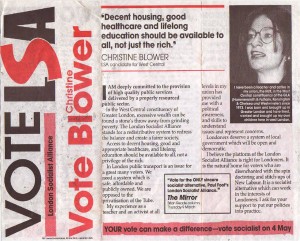 In Hammersmith and Fulham the number of trade union officials whose salaries were paid by the Council Taxpayer fell from 7.8 in 2011/12 to 3.2 in 2012/13 measured as “full time equivalents”.

But the figure should be nil – as it is for many other councils.

Furthermore Labour has increased the number of co-optees on committees – at a cost of £504 a time.

One of these posts has gone to Dennis Charman – a full time National Union of Teachers official whose salary is already paid by the council. He was appointed as a “teacher representative” to the Children and Education Policy Accountability Committee – although so far as I can gather he spends none of his time classrooms teaching.

Mr Charman is the partner of Christine Blower the General Secretary of the National Union of Teachers – a far left activist who once stood for the London Socialist Alliance.

Mr Charman is a staunch opponent of academies and free schools. By bunging him an extra £504 of our money the Labour-run council makes a mockery of their claim to be supportive of such schools.

One thought on “£148,000 of Council Taxpayers money in H&F spent on salaries for union officials”