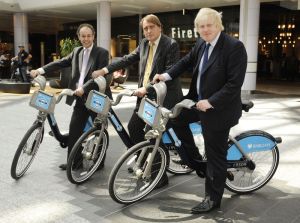 Public Health England estimates that 72 people a year in Hammersmith and Fulham die as a result of air pollution. They put the “associated life-years lost” at 1,070. That compares to two of us a year who die in road accidents. Also two of us a year being murdered.

Among the major causes of death in our borough are Cerebrovascular diseases (Male: 43.5, Female: 20.4 death rate per 100,000),  Chronic lower respiratory diseases (Male: 44.4, Female: 26.2) and  Ishaemic heart diseases (Male: 90.6, Female: 37.3).  Air pollution is a significant contributor to these. But it is insidious – it is less dramatic than being stabbed or knocked down by a car. One of the reasons I oppose road humps is the evidence that they increase pollution.

At present our monitoring of air quality appears deficient compared to other boroughs.

The good news is that since Boris Johnson became the Mayor of London the air in the capital has become cleaner. Planting trees and encouraging cycling have both helped.

Another initiative is dust suppressant spray.

The Mayor’s Air Quality Fund is providing £100,000 to pay for this in Scrubs Lane. Research has indicated that this treatment provides a significant reduction in PM10 – the dust which we inhale into our respiratory tracts and which impedes our lung capacity. Depending on the frequency of respraying and the type of site chosen air pollution is reduced by something between a quarter and a half.

Boris Johnson has issued planning guidance encouraging councils to include a requirement for this spraying in return for granting consent to construction projects.

I have asked Elizabeth Fonseca, the Environmental Quality Manager at Hammersmith and Fulham Council if this guidance will be followed.

“We are in the process of reviewing this recently issued Supplementary Planning Guidance so that we may further develop our own procedures for addressing dust issues via the planning process.  However, I can confirm that if dust suppressant application is seen to be an appropriate mitigation measure, we would expect to agree details at the application stage else we would recommend a condition requiring its use at a development site by the developer; this is our current protocol where other dust abatement measures are deemed necessary.  We would not seek funding to allow us to undertake this work as it would be an additional burden on services which can and should be addressed by the developer.

“In addition to this, we also review Demolition Notices under the Building Act 1984 and place similar conditions on Counter Notices where we have similar concerns regarding demolition works.”

I will pursue this. The cost is not that great – it involves retofitting a salt gritter which costs around £70,000 a time. It seems to me it would be worthwhile to have regular spraying of streets in the borough – even where major works are not taking place.