Between the chain stores of the Westfield Shopping Centre, and the Tesco Superstore of the Shepherd’s Bush Road, there has never been a lack of pre-packaged ready-wrapped barcoded consumables for the residents of Brook Green and Shepherd’s Bush.  But whilst these retail giants grow strongly, independent shops have struggled, as the empty premises of Richmond Way and Blythe Road can testify. 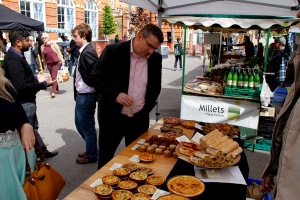 It was then with a lot of excitement that residents greeted the opening of the Wild Food Market in the grounds of Addison Primary School.  The promise of fresh food, market stalls, and most of all the chance to try samples, ensured that the opening day had residents queuing to get in, and within a few hours most of the stalls had sold out.

Since it first opened, the Wild Food Market has added to its range. From an original opening of meat, cheese and pastry stalls, the market now has 23 different regular stallholders, and various other guest traders.   From specialist ingredient-centric stalls, such as the Mushroom Table, the raw honey table, and the goat’s cheese table, to the stalls selling ranges of soups, farm produce, breads, seafood and freshly cooked burgers and hotdogs, the range is fantastic.  For those looking for a drink, the juices, teas and coffees are delicious. 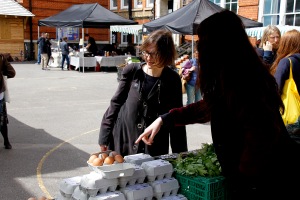 Where the local community have gone really wild for the market though has been their interactive cooking demonstrations.   The chance to have children taught how to make fresh ravioli (and then cook and eat it!), burgers, and shown how to cook and prepare fresh vegetables, has really enthused parents.  As a result, more and more parents are finding they are being dragged back to the market by children eager to try more things and learn more about the food that they are eating.

Educating people about food is ultimately part of the vision of the Founder of the Market, Pushpal Dhawan.  He is already talking to Addison Primary School about coming in for free during the week and teaching whole classes about food – how it’s grown and produced, why you should eat healthily, and how to actually cook it.  He wants to be “a one stop shop, where people can buy direct from the producer but can also stick around to learn about food and drink – a source of education and entertainment.”